We ended last year with our family of three, but territory is very hard to keep around here.. Luckily our male fox (Schofe) is a very large and our female fox (Thea) is very bossy, so the pair managed to keep the territory quite easily! Their cub from 2016 (Willow) is also still around, so it seems the pair have allowed her to stay for another year.

The family visited most days, and it wasn't long before Thea started to develop a baby bump. We kept an eye on the shed just in case Thea decided to use it this year, and with a bit of luck we noticed that it was being dug out. Foxes will often dig multiple den sites though, so this didn't mean that she would use the den. I set some cameras up to record what was going on at the den site, and Thea & Willow were visiting it most nights to look at it. After a while Thea got very big and the camera showed she was starting to go under the shed to prepare it. A few days later Thea gave birth on the 21st February!

I kept the cameras out to watch the action, and Thea was a brilliant mum. She would stay with the cubs to keep them warm, coming out a few times a day to eat and drink, and then going back to the babies. Schofe would bring food every few nights to Thea and to check on her and the cubs. Willow continued to visit in the day, and to our surprise her belly started to become larger and larger. We believe that Willow gave birth on the 6th March, her cubs are possibly where Thea had hers last year.

Both foxes have had a hard time looking after their cubs, as the British weather has been quite weird and given us snow in March! The cold can be very dangerous for young cubs, but Thea has been staying with her cubs to keep them warm. The cubs started to look out of the den at night, but they were understandably unsure about the snow. Luckily the snow melted just two days after the cubs starting to look out, and on the first official day of Spring (20th March) the cubs have taken their first looks out into the world in the day!

Willow has been seen very briefly since given birth, but not much as she is off looking after her cubs.

As the cubs grew they became more adventurous and we managed to count 6 individuals! The cubs were very shy compared to cubs we've watched other years. They slowly ventured out but liked to stay very close to the den. As always with Thea, things couldn't be simple! Once they were moving further away from the den, she moved them away from the den! Luckily she only moved them next door, and the braved cubs still visited occasionally. As we were only seeing a few it was very hard to ID and name some of the cubs, however we did discover there was only one female cub in the group! This female was named 'Luna' and was one of the brave cubs, she would often be around up to no good.

As the cubs grew Thea decided to throw another spanner in the works and once again moved the cubs! However it wasn't as simple as that, as she seemed to move half of the group. We're not sure if the cubs just got too adventurous and left the garden and couldn't get back, or whether Thea moved them on purpose. As the cubs got a bit bigger we did see a few of them again - So it was nice to see they were safe wherever they had got to! As things seemed to settle it all got very confusing again as all of the male cubs left! The cubs were still very small at this stage and relying on mum, so they must have been moved by Thea. After a while we worked out she seemed to have moved the male cubs to the house over the road from us! Things are never simple in foxy life!

Unfortunately with the cubs living over a busy road we weren't able to watch them any more, though we did see them occasionally at night out the front of the house. With the male cubs moved it did still leave us with Luna! Luna seemed very nervous to leave the garden and stayed in the garden a lot longer than normal before venturing out to explore the rest of the territory. This meant we got to know Luna quite well and she is seen almost every day in the garden.

Once Luna built the courage up to leave the garden of a night we started seeing her on the streets with her siblings! A nice sight to see them reunited.

With all the the remaining cubs adult size now, it will soon be time the adults start to scare them off. Thea and Schofe are still seen most days, however Schofe seems very keen to move Luna out of the territory! So we'll have to wait and see what happens in the foxy world next

Side Note:
Willow was last seen on the 18th September. We hope that she is still okay, however a dead fox was found. We can only hope she'll appear again soon! 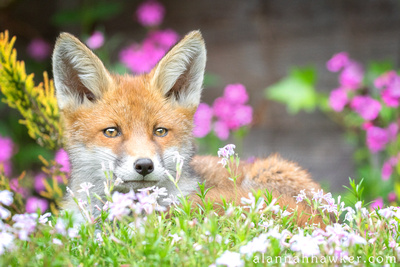 'Luna' our only female cub!

'Jasper' the most bold cub