We start this year with the strong presence of 'Thea' (our cub from last year), and her admirer 'Schofe'. Jack, has been keeping her distance since Schofe moved into the territory, and was last seen on the 20th December 2015. Jack has disappeared at this time of year before, but moved her cubs in the garden once born, so we're hoping a similar thing will happen this year, but we'll just have to see! Monster is also occasionally still seen, but Thea has become quite protective over the garden and has started chasing her off. She was last seen on the 16th January, when she was recovering from a nasty back wound all along her spine. It's believed she caught herself going through a small hole, and cut her back open. The wound was seen to by the amazing team at Wildlife Aid, however it was decided the wound looked very clean and was healing extremely well on it's on, so thankfully no intervention was necessary.

Thea gave birth on the 3rd March, and was seen outside the den briefly after. For the next couple of weeks we saw Thea briefly every day, but she quickly went back to look after her cubs. However on the 20th we got more of a view of the cubs than we expected! When watching Thea in the garden we noticed her go back to the den and come back out with a cub in her mouth, she then proceeded to move it (and another 6!) under next doors shed. We were quite shocked to see her move them so early, but even more shocked when we saw her move them again!! Just 4 days later she had moved the cubs back into our garden and under out shed, instead of into den she had given birth to the cubs (our compost). Our shock continued when Thea moved the cubs a further two times, it's usual for a fox to move her cubs once, but this many times was very odd. We decided it was because she was a new mum and very nervous, especially with such a big litter first time!

When Thea moved the cubs for a forth time, she moved them much further away, which meant we didn't get to see them grow at all. During the summer months Thea and Schofe visited daily an we saw the very occasional glimpse of a fox cub as it ran away. That was all we really saw of the cubs though, so there isn't much information on what happened to them.

The year continued much like this until about August, when we started seeing a young female cub hanging out with Thea. Unfortunately this didn't last for long as Thea turned up the 28th August, not using her back left leg at all. We were all very worried the leg was broken so Thea had to be caught and taken to Wildlife Aid. On arrival Thea has X-Rays done, and thankfully there were no broken bones! When looking at the X-Rays it was discovered she had an old injury though, she has a bullet in her sternum! We were all very distressed to hear that she had been shot at some point, thankfully the bullet hadn't done much damage and was left. After a week of rest and medication for her leg injury, Thea returned home.

Once Thea returned home she went straight back to her usual self, bossing the other foxes around! We continue watching the pair and hoped this was the end of fox dramas for the year, but nothing is every simple for foxes! Some months later Schofe came into the garden and wouldn't open his eye, at first we thought this was harmless, until a few days later when he opened it and we saw there was a wound to his eye. So once again I collected a trap and on the 17th November I took him to Wildlife Aid. On closer inspection of the eye at the center it was decided there was something in his eye! His eye was operated on with the hope of taking the object out and saving his sight. Thankfully the surgery was very successful and a thorn was removed from his eye. After a couple of weeks of treatment for his eye after his surgery, he came back home on the 3rd December!

Unfortunately Schofe wasn't as thankful as Thea that we helped him, and once he was back in the garden he didn't visit us for over a week. In his absence that week we did have some other visitors though. Two of his and Theas cubs started visiting, a male and a female cub. There was another visitor that was very exciting for us though, Theas mum Jack! Jack moved out of the territory last year to let Thea have it, and had only been seen once since then, so it was great to see her looking very healthy, especially at almost 5years old! Once Schofe started visiting the garden again Jack stopped visiting and moved back to her side of the territory.

The few remaining weeks of the year were uneventful for our little family of four, but what will next year hold for them all? 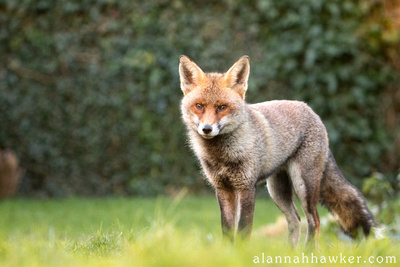 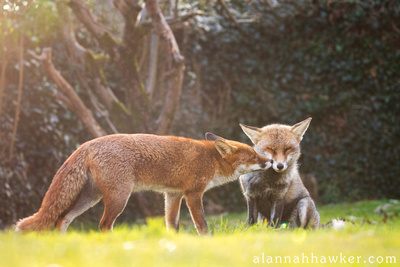