Each year there are lots of fights for territory, and we left the last year with hope the three vixens we were following would still be around. Jack is an amazing fox, and not one you want to mess with, as Scamp has found out a few times! With Jack being our dominate fox and having two younger vixens (Scamp and Monster) to back her up, we didn't see a single other vixen in the territory! So this leads our three girls into our 2015 story! Although

Our three girls had managed to keep away other vixens, however they had attracted the attention of a few new dog foxes that were in the territory. I never see the dog foxes until the vixen is in season, then he will follow her everywhere for about 3days. When I noticed this happening this year I was again able to work out a due date for Jack to give birth (going by the average pregnancy time of 53days), giving Jack the same due date as Scamp last year, March 5th! I didn't see the dog fox again, so I couldn't tell if Scamp or Monster may be pregnant.

Just a week later and Jack had started digging under our shed, showing a lot of interest in using it for cubs, so this confirmed she was pregnant! Over the next two weeks Jack and Monster were seen almost every day, though Scamp wasn't seen much. Jacks interest in the shed remained and she dug it out more every night. On the 2nd of February I looked out to see all three girls in the garden together! With delight I went out with my camera hoping to get some shots of them, but something didn't seem right, and when Scamp turned her head I could see exactly what it was...

To my horror Scamp had a very large gash down the right side of her face, dangerously close to her eye. I got a few pictures of her cut so I could see more clearly what was wrong, and after consulting with the rescue center where I volunteer, The Wildlife Aid Foundation, it was decided Scamp needed medical attention. After a couple of days of trying I managed to safely catch Scamp in a trap and take her to Wildlife Aid for treatment. For the full story of her progress at the center and pictures/videos of her cut from start to release, please click here.

Just under 2 weeks later, and an amazing job done by Wildlife Aid, and Scamp was ready to be released back into her territory! After this Scamp was around every day, and Jack and Monster would appear in the evenings together. Monster still seemed a little lost with what she was meant to be doing so would often follow Jack around. However after a few. Jack was still digging at the den site and getting bigger each day. However things aren't always simple in foxy world, and after a week or so Jack and Scamp started fighting. It was originally feared that Scamps cut may have been a bite from Jack, and with their behaviour we felt that might have been the case. Jack gets very protective around her cubs and with it getting close to her due date we think this is why her and Scamp fell out. As well as this we believe the Dog fox in the area died, which would leave Jack struggling to feed her cubs, so she saw Scamp more as a threat.

Jack continued to dig at the den site right up till her due date, then on March 2nd Jack arrived in the garden looking a lot skinnier and was very skittish and quick to come and go.. From her behaviour I knew she'd given birth, but not under the shed in my garden! Jack continued to visit the garden briefly each day, having to get back to her babies quickly to feed them. While she was gone Scamp and Monster were still visiting, and since Scamps return from Wildlife Aid, her belly had grown day by day, as she was also pregnant! With Jack using a different den site Scamp took interest in the shed instead, and on March 7th we saw Scamp outside the shed with a cub.. We don't quite know what happened or why she had the cub outside the den in her mouth, but just a few days later Jack moved her cubs into the den. It's believed that Scamps cub/s didn't survive due to thee stress of being captured to have her much needed treatment for her wound. There is a chance that her cub/s could still be under the shed with Jack (this happened last year), but unfortunately we just don't know.. Since then Jack continued to chase Scamp and she has now not been seen since March 26th.

In better news with Jack moving her cubs under the shed in my garden it gave me the chance to turn my under shed camera on (placed there in 2012!) so that Jack and cubs could then be viewed live in the den!

After turning the camera on under the shed, I, along with many other viewers, where able to watch the cubs grow up. We saw intimate moments of mum, Jack, feeding and grooming the cubs, and we where even lucky enough to see them eating their first solid food! As the cubs started to get a little bigger we managed to count 7 healthy babies under the shed! As always the cubs grew quickly and at exactly 4 weeks old the cubs started to come out the den. At this point I was able to introduce another camera to the outside of the shed so we could carry on watching the cubs grow.

The cubs where as playful as ever, and having Monster helping to look after them led to even more fox madness! The cubs often liked to team up and try and climb on her! As they got bigger this got too easy so they then started trying to climb the tree instead, and this time they didn't team up! One cub would be in the tree while two others where biting and pulling at his tail trying to pull him out - great fun for the cubs but less so for the poor adults trying to control this unruly bunch!

As the cubs grew they started to venture further - this is always a worrying time of year as this is when the cubs start to come in contact with the roads, and it's always the same time every year when we lose some cubs. Unfortunately, within 2 days of last years first cub disappearing, we had our first loss. When going in the garden on the 21st May I found the little girl of the litter, named Rose, dead in the garden. Her injuries looked to be the result of being hit by a car, she'd managed to struggle back to the garden before passing away.. Unfortunately the roads continued to caused problems for the cubs, when two more cubs also disappeared (Socks & Mia), although we can't be sure this was due to a car hitting them, the chances are very high. The four remaining cubs continued to grow and hopes where high for them, as after watching them on the streets at night I could see how wary they where of cars, which was a great sign! However the very next day proved me wrong when my favourite of the litter, Ash, was found dead in the road. Although we expect this each year, it's still so very upsetting seeing their lives ended this way..

Fortunately our hopes where high for the three remaining cubs, and we where proved right! It is now the 12st of December and Dusty and One Sock have moved on to find their own territories just a few weeks ago. Dusty is a very large male fox, so it's likely he'll do very well finding his own territory. The other male cub, One sock, is very shy and cautious, but I'm sure he'll do well too. The remaining cub is a female named Thea, she may also move on but her mother, Jack, may allow her to stay -We'll have to wait and see!

On the 20th December we were surprised to see a large silver fox in the garden with Thea, we named this fox 'Schofe'. He was very interested in Thea and was appeared to be courting her. We expected the male to be around a few days and then for us not to see him (as this is what has happened every year), however to our surprise we now see Schofe most days. He's a very unusual fox, very grey with a black belly and a white tip to each of his paws. He doesn't mind my presence in the garden to photograph him, and he seems quite caring to Thea! We will see what happens with this pair next year.....

* * * Please note Scamp update * * *
Although Scamp doesn't visit the garden any more, we have seen her in another part of the territory (6th June), so it is believed Jack just chased her away from her denning site while she has cubs. Her face was fully recovered when last seen, and she looked as beautiful and healthy as ever! 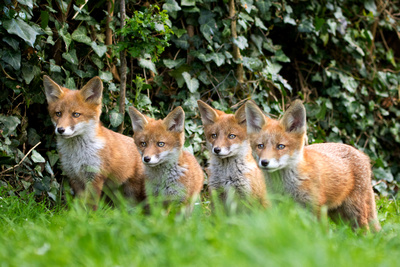 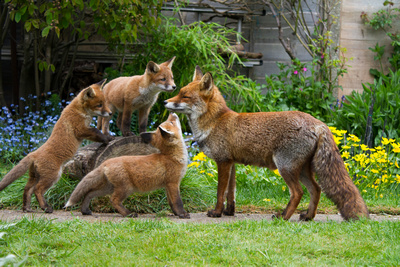 Jack with three of her cubs