With Jack now gone, this leaves our 2014 story starting with our youngster - Scamp! We start in January with it still being dispersal season for the cubs, and the mating season. This has led to us having some new foxes in the area, more specifically some males, who are quite interested in our little Scamp! With Scamp being such a beautiful fox, she seems to have captured the attention of quite a few dog foxes, at least three in fact! However one male seems to have caught most of Scamps attention and has followed her around for 3 days straight. From this date I counted down down the average pregnancy time of 53days, giving Scamp a due date of the 5th March if she is pregnant.

Since then Scamps due date has been fast approaching and with each day Scamps belly started to look larger and larger, confirming that she was pregnant! When I write this Scamp is tucked up in one of her dens with her cubs after giving birth in the early hours of Wednesday 5th of March, sticking to her due date! Now it's down to Scamp to keep the cubs warm and fed until the make their appearances in around 3-4weeks...

Well things change very quickly in the foxy world! On the 26th of March a familiar face appeared in the garden... It was Jack! Looking a bit wet she was wondering around the garden like she hadn't gone anywhere! However one thing had definitely changed, I could tell just by looking at her belly she had also had cubs! With Jacks return the bond between her and Scamp seemed stronger than before and the girls could be seen grooming each other almost every day. I waited patiently to see Scamp or Jacks cubs, however it was unlikely I would see Jacks cubs as they weren't in a close den. As the weeks went on it became increasingly more worrying that Scamps cubs hadn't made an appearance.. Usually they will come out around 4-5weeks, however on Wednesday 23rd April the cubs would be 7weeks old and still no appearance, so I could only presume the worst.... But the very next day I woke up to see cubs running all over the garden!! It turns out on the night of Wednesday 23rd Jack had moved her cubs into next doors garden (where Scamp was denning)!

The cubs were seen most days and are grew very quickly. Once i manged to start telling the cubs apart it became obvious one cub was a lot larger than all of the others It is believed this cub is Scamps cub and she only had one, which would have made it very nervous about leaving the den, hence is hadn't made an appeared before Jack moved her cubs in. In total there were seven cubs (Six Jacks, one Scamps) and all the cubs were doing well and bouncing around! However as they started to grow some cubs unfortunately disappeared.. With such a large litter of cubs it was expecting that some wouldn't make it. One cub disappeared before it could be named, and not long after him disappearing 'Plod' also disappeared. 'Plod' was very brave and didn't seem to react to noises much, so it's thought he may have had hearing problems which left him vulnerable. The cubs continued to grow for a while until another cub unfortunately stopped appearing. This cub was 'Rio', she was the runt of the litter and followed her mum Jack around constantly. She was found out the front of the house and looked to have been hit by a car, a very very sad time, if only people drove a little more slowly.. The cubs were then getting to the point where they would be okay to leave home, when we lost one more cub, 'Archie'. This was my favourite cub, although I think it was a bit early for him to leave on his own, there is a possibility he did, but we will never know.

The remaining cubs of Jacks were 'Lex' and 'Scaredy', both male cubs. As they were males they would not be allowed to stay around and their father had started to drive them out of the territory to find their own homes. Both cubs slowly started appearing less and less until we stopped seeing them at all. Although it was sad to see the cubs I knew leave, it was great knowing they'd got to adulthood and would be out finding their own homes. Scamps single cub 'Monster' carried on showing her face though, as she is a female Jack and Scamp decided to allow her to stay. She is seen most days but is very wary and isn't around for long. All the cubs had grown well and knew to be scared of humans, so I'm sure they will all do well out there!

Jack, Scamp and Monster are still all seen, but not as often as they are now defending their territory, hopefully they'll still be here next year..! 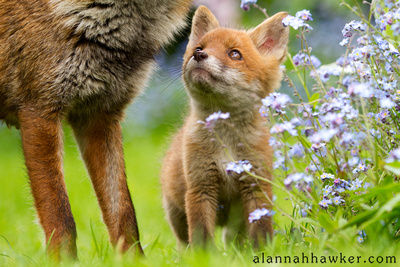 One of the cubs gazing up to mum, Jack. 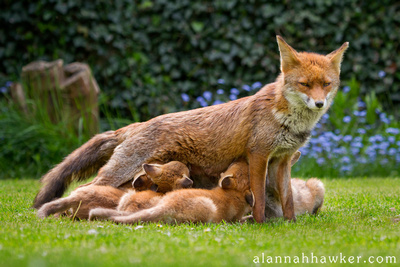 Mum, Jack, with her cubs suckling.