Well, the start of the 2013 fox family starts exactly where the 2012 story finished, with Jack! So let us continue where we left off. Jack was looking rather large in February and kept digging under my shed. As this was where she was born and she was showing interest, I invested in a tiny camera that I put under the shed to capture what was going on. Jack continued to dig under there but eventually decided not to use it, and on the 20th February Jack gave birth to at least two cubs! This is a month earlier than the cubs should have been born, which was a little worrying, especially as it still took them until April to come out. However when they finally came out, there were two very large bellied little cubs! The cubs had mum and two dog foxes feeding them, as well as being stuck under a shed for two months, which led to their large bellies. However once they started playing they soon got back to a normal size.

As with the other cubs I photographed, these two took a little while to get used to the camera noise, however one cub was much more bold and got used to the noise quicker. This cub I called 'Scamp' due to her bold and mischievous personality, and she has certainly lived up to her name! Both cubs were females and were growing well and fast. Unfortunately in early May we stopped seeing the one cub which was more timid, as she was so young she wouldn't have been able to look after herself, so I could only presume the worst again. RIP little cub. Scamp now had the full attention of her mum and continued to grow well. As Scamp was an only cub, she now had to learn everything from mum as she didn't have any siblings to play with. Jack would come home everyday and play with Scamp to help teach her the skills she needs when she moves to find her own territory.

Both mum and cub continued to get along well until around November. Now it was getting near the time for Scamp to leave, Jack started to distance herself from Scamp more to encourage her to leave and find her own territory. However this is not quite how things worked out. Jack was a very soft natured fox, unlike Scamp who was a very bold youngster. This led to Scamp telling her mum off a lot of the time, and Jack just giving in to her cub. Then in December Jack stopped visiting as much until we stopped seeing her. Unfortunately it seemed that Scamp had pushed her mother out of her territory. Jack was a stunning fox in so many ways, and it was an huge privilege being able to watch her grow, recover from mange and bring her own cub up to adulthood (in just two short years!). I have many memories of Jack that I will never ever forget, and I just hope she does well in her new territory. 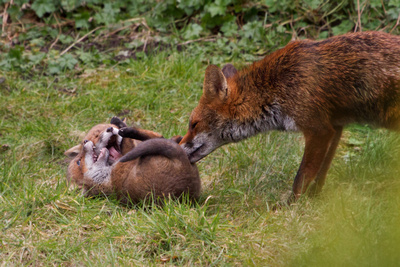 Jack with her two cubs 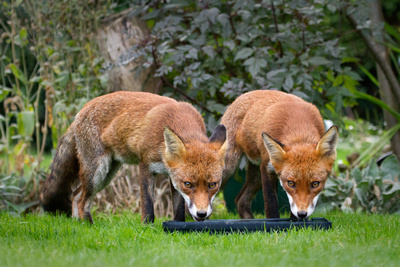