This year we had a whole new fox family, with the cubs and parents from last year moving on. These foxes decided to den under my shed instead of next door's, we started to see signs of this when the dog fox kept going under our shed. When it started to get near the time of the fox cubs emerging I set up my trail camera up by the shed. Then on April 11th I caught the cubs first views outside their den! These cubs were braver than the 2011 cubs and didn't take long to get used to the noise of the camera. With their den being in my garden this year I was able to watch them more closely. I had my trail camera by the shed most nights and was able to capture the cubs suckling from mother, an amazing sight to catch.

After watching them for a little while we noticed this year we had six cubs, and that unfortunately all of them had mange. Mange is a horrible mite that burrows under the skin and causes the foxes to scratch so hard they cut their own skin. The skin scabs and cracks; limbs also become painful, it's said to feel like having arthritis. The mites can continue getting worse until the fox dies (depending on the fox), therefore we bought homeopathic mange treatment from Wildlife Aid and gave this to the cubs. This was a six week treatment. At about 3-4months old the cubs mother moved them to a different den, however this time it was only next door (where the 2011 cubs were born) so I could still watch them. After a few weeks of the cubs moving we noticed one cub wasn't very well. This cub we called 'Poppy'. We tried for a long time to catch her, until the Wildlife Aid Foundation leant us a trap to catch her. Unfortunately Poppy had a prolapse and on July 21st she was put to sleep. Poppy was a very sweet little fox and was taken far too soon. RIP little one... Just a week later on the 27th we also learnt from our neighbour that he found one of the cubs we called 'Red' dead in his garden. Red was the only male of the six cubs and was the dominant cub. He was very bold and was missed by his sister 'Jack' who spent most her time with him. RIP Red. Not long after this, one of the four remaining cubs also disappeared. This cub was one of the most scared cubs so we didn't know much about her, or what happened to her.

The remaining three sisters were named 'Jack' (the dominant cub), 'Limps' (due to her bad limps from mange) and 'Scaredy (due to her being very timid). The girls continued to grow and were always up to no good together. They were very playful and Jack and Limps were inseparable. However their mange was getting no better and Limps was suffering the most with it, as she was always limping on her back legs due to the pain. I continued to keep a close eye on the girls and unfortunately Limps stopped appearing.. It's not known what happened to her but I can only presume the worst as it was too soon for her to leave... This left us with the two girls out of the six we started with. Unfortunately their mange wasn't improving either. Slowly Jacks eyes started to close more and more each day, I knew at this point she needed help and immediately got a trap for Wildlife Aid. The next day Jack appeared looking very very sad. All of her hair had come out and her skin was all cracked, the saddest sight I'd ever seen. Luckily it wasn't hard to catch Jack and she went straight into the trap. She spent a month at Wildlife Aid being treated for her severe mange before she was able to come back home. When I bought her home she actually curled up and went to sleep in the carry box, then as we entered the road I live in she suddenly woke up like she knew where she was... I released her back in the garden and she immediately got back to scenting her territory! Her sister Scaredy's mange also got worse and she was also treated for the mange before she left to find her own territory in February. Then in February Jack's belly started to look very large.....

Top Right: Jack with mange ( though not at her worse). Top Left: After treatment. Bottom: 1 year later 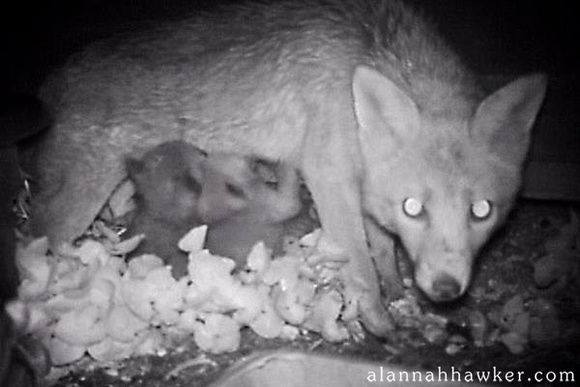