This is when my fox watching started. We'd always had foxes in the garden, but we only ever saw one run across the garden every few months, however on April 18th it all changed. While looking in the garden one morning my mother suddenly spotted a small fox cub running at the top of the garden! She immediately told me when I got home and I instantly grabbed my camera and waited in the garden.... After a some hours of waiting, a little nose poked through the hedge and out popped a tiny blue eyed fox cub. From then on I spent the entire summer in the garden with the foxes. To begin with I had to be very careful when taking pictures of the cubs as some of them would jump and run off at the noise of the camera, and of course I didn't want to scare them. However they gradually got used to the noise and before long I was able to take pictures of them without any disturbance to their play. After a week or so we thought there were about 5 cubs, then when sitting in the garden in the evening I saw the cubs mum come home. She went through to get the cubs from under next doors shed where they had denned, then when she came back into my garden seven cubs followed after her!!! Day by day their confidence grew until at about 3-4months old their mother moved them to a different den site (most foxes do this for safety). Unfortunately the new den site was a little too far away for the cubs to visit the garden each day. However after a few weeks one cub came back.. This cub we named Scar, he was one of the more bold cubs and had a scar on his nose from the first time I photographed him as a cub. Scar visited the garden every few days allowing me to carry on watching him grow into an adult fox. However before long it was time for Scar to move on and find a territory of his own, I last saw and photographed him in February 2012. He became a stunning fox and I feel privileged to have been part of his life. 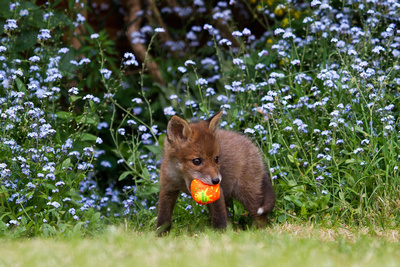 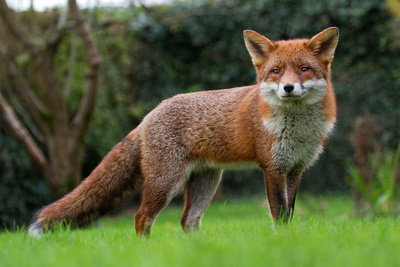