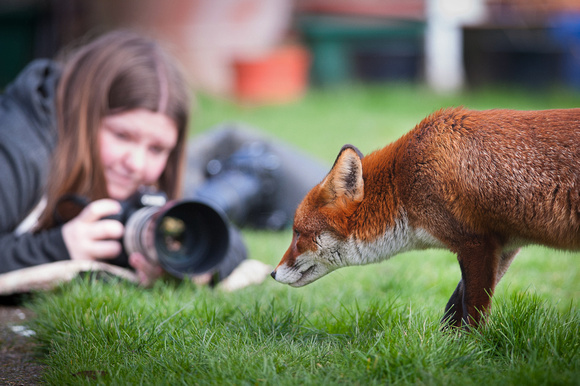 Alannah is a 27 year old wildlife photographer based in South-East England. Her work, with a focus on British wildlife, has taken her all over the UK, although there is always a strong affinity for her hometown where Alannah has been watching the same family of wild urban foxes for over 8 years.

Alannah first spotted fox cubs in her garden in 2011 and started watching and photographing them, but it wasn't until 2012 when a vixen had cubs under her shed that the close relationship she has now started to form. After watching the cubs grow to adulthood, Alannah was happy to see that one of the cubs, a little vixen nicknamed 'Jack', stayed in the territory, and the following year had cubs of her own. By carefully watching 'Jack' since her birth, Alannah managed to build up a close relationship with the wild vixen - so much that 'Jack' treats Alannah as one of her own and allows her to see intimate events usually hidden from human eyes. Through this intimate relationship Alannah has managed to build up a family tree of the foxes which can be seen here.

It was this relationship that lead to Alannah's close documentation of fox life, and her footage of Jack as a cub was featured on Channel 4s 'Foxes Live'. The following year she carefully placed a small night-vision camera under her shed while it wasn't in use, and was lucky enough that Jack chose to den right in front of it two years later! The footage was streamed live around the world as 2015 sensation 'Cubcam', and earned Alannah an invitation onto BBC's Springwatch Extra to discuss her work live.

Her success has only continued, gaining 'highly commended' awards in the British Wildlife Photography Awards for five years running; In 2014 with 'A Quick Glance', in 2015 with 'Division', in 2016 with 'Admiration', in 2017 with 'Delicacy' and commended with 'Day Dreamer' and in 2018 with 'From The Shadows'. She has been featured numerous times in her local and regional press, including a two page spread in Photography Monthly and has even formed part of the 2016 British Wildlife Photography Awards calendar. She also regularly volunteers at a local wildlife rescue (The Wildlife Aid Foundation, Leatherhead) to help injured and orphaned animals, where she improves her knowledge about her subjects. Alannah is available to give talks on her work and relationship with the foxes, and often holds exhibitions around the Surrey area. Her work is also available to buy on her site, all products are hand made by Alannah and are available for purchase using Paypal or credit card. You can find all the information on the products from cards, to prints, to framed signed prints on the shop page.

Photography Monthly Magazine 2014 - A double page interview about my work

Surrey Mirror Newspaper 2014 - An article about my photographic work

Dorking Advertiser Newspaper 2014 - An article about my photographic work

Surrey Mirror Newspaper 2015 - An article about my work & awards

Practical Photography 2018 - A feature on my award winning image 'Delicacy'

Over 35 shows and exhibitions